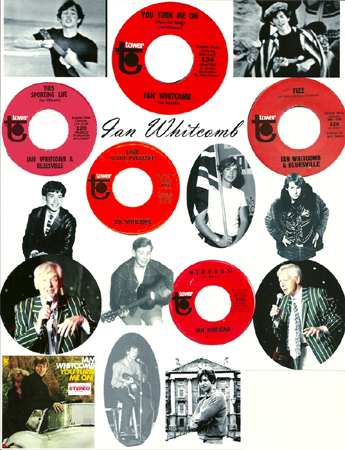 THE IAN WHITCOMB SHOW RETURNS TO THE AIRWAVES!!
This Sunday, and Every Sunday

THE IAN WHITCOMB SHOW MOVES TO XM CHANNEL 152 THIS SUNDAY

This Sunday, British Invasion veteran and music historian Ian Whitcomb will share a special “Parade of the Faves” to introduce new listeners to the program.  The Ian Whitcomb Show features an eclectic and exciting mix of American and British popular songs ranging from Tin Pan Alley Ragtime, through 1920s crooners and dance bands, to 1950s rock and roll.  This music-intensive program also features Whitcomb’s fascinating stories behind the music, the circumstances surrounding their composition and their noteworthy instrumentations.

KTHO Radio (K-Tahoe) has picked up Ian's XM Radio Show and are broadcasting it and streaming it on 8 AM Saturdays.
Here's the link:

Ian plays Bulldog Drummond in the brilliantly produced, "Bulldog Drummond." The entire cast is fabulous. The script is intelligent and very clever.
Think 1930s/40s radio drama. It's a 5 hour adventure serial. Gosh, it's good.
Give a listen ...

Go to youtube.com and search for Ian Whitcomb and see lots and lots of great video!

Ian's Vintage Dance Bands are for hire!
Ian runs two very successful bands that  perform at public events, such as the annual concerts at the Workman & Temple Homestead and the vaudeville shows at the Alex Theatre in Glendale, as well as the Levitt Pavilion in Pasadena. They can be heard, too, on the soundtrack of several current movies, available on DVD: "The Cat's Meow", "Stanley's Gig" and "Last Call", for example.
But most of their work is at private functions: parties, anniversaries, etc. The bands-- the five piece combo of Ian Whitcomb & His Bungalow Boys and the ten piece Ian Whitcomb & His Dance Band, play for listening enjoyment and for dancing. Ian's ensembles, comprising accordion, ukulele, banjo, slide guitar, violin, sax and horn sections, xylophone, piano, bass and drums, are the only ones in California playing specifically for dancers: waltzes, tangos, foxtrots, one steps, two steps and even early rock & roll. There are plenty of other bands around specializing in period music ( mostly 1930s/40s swing) but they are playing jazz , generally for their own pleasure and that of a few buffs. Ian's bands are practical bands for dancing and active listening. Ian encompasses all of pop music from ragtime to rock--there's nobody else like him or with his credentials: hit records, a Grammy, a raft of history books. E-mail and reserve the ensemble of your needs for your special function.
E-mail: Ianwhitcomb1@aol.com. Very reasonable and flexible prices.
For samples of his music go to the CD section on this site and
look up the CDs that are listed as featuring The Bungalow Boys and/or the Dance Band.

When bands travel, they like to stay in nice places. (office space nyc)

CELEBRATING THE FORTIETH ANNIVERSARY OF IAN WHITCOMB ON THE BILLBOARD CHART!
Click here for details

"Turned On Alley" - The First DVD from Ian Whitcomb and the Bungalow Boys!
Click here for details

All of Ian's VHS Videos are now available on DVD!
Click here to go to Ian's video page

Drawings of Ian made by Don Bachardy in 1966 - Click here 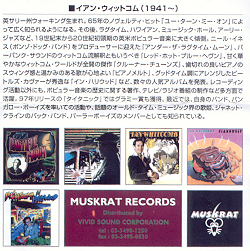 Exact replicas of LP's recorded by Ian
in the 1970's

CLICK HERE OR ON PICTURE FOR IAN'S CD PAGE!

"Lotusland"
SPECIAL OFFER! A BRAND NEW (SIGNED) PAPERBACK REPRINT OF IAN'S
ONE AND ONLY NOVEL-----"LOTUSLAND--A STORY OF SOUTHERN CALIFORNIA"!
This novel was originally published in 1979, and only in Britain. There are only a half dozen hardbacks left and so Ian has had a paperback made. You can only buy this from Picklehead---and it is signed! So you can sell it on e-bay for twice the price!! Our price, incidentally, is $20, and that includes postage.

Read about Ian and his life in a February, 2002 article in LA Weekly. Click here.

"STANLEY'S GIG"---MUSIC FROM THE MOTION PICTURE---Now available on CD
from this site for only $15! All the songs and more from
the first great ukulele movie, starring Faye Dunaway and William Sanderson,
and featuring Ian Whitcomb as Smiling Jack.
Ian CD page.

A SENSATIONAL VIDEO!
“L.A—-MY HOME TOWN”, a BBC documentary made in Los Angeles in 1976 and starring Ian as a British expatriate uncertain of his loyalties. Lots of frontal nudity from both sexes! In one notorious scene Ian is thrown into a swimming pool by an arch female pornographer. She then proceeds to remove his bathing suit. Other great scenes feature Peter Asher, The British Consul General, The Huntington Library, a male nude model and his photographer, and the Disneyland Fourth of July Parade. Songs include, ”Wurzel Fudge” and “You Turn Me On.” Questions were asked in Parliament after the prime time screening of this film on BBC TV. Get your copy now of this eccentric item before we are stopped. See the video section for more details and a saucy picture of Ian and the female pornographer (now a happily married mother.)

Enjoy Ian and his Bungalow Boys at their regular gig at Cantalini's Salerno Beach Italian Ristorante. Here they are: Fred Sokolow (guitar), Ian, and Dave Jones (bass) in their corner at this cozy yet buzzing spot by the beach in Southern California. Where the Happening People meet. Land at LAX and you're minutes away. The address is 193 Culver Blvd, Playa Del Rey, California, 90293. Make your reservations at (310) 821 0018. The Boys play every other Sunday from 6:30 pm till 9:30 pm. For details go to www.salernobeach.com. 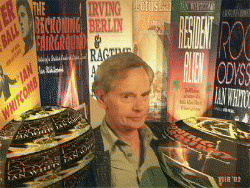