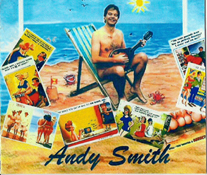 Here at Picklehead, we've had really good luck with artists from England (Les Barker, Ian Whitcomb), so when we received an e-mail from this guy telling us all about his funny music recordings we couldn't wait to check him out. And we weren't disappointed. Andy has a whole album of simple-but-effective recordings just full of British wit and frivolity. There are songs here about inflatable girls, blind dates, staff parties, funerals, playing with yourself, and even a rap song. (Okay, so middle-aged white guys from England are not everyone's choice for rappers but hey...)
Anyway, check out the song samples below and we think you'll agree - this is some bloody good stuff!

SONG SAMPLES BELOW IN MP3 SECTION

All the songs listed below are now available for digital download at JUST 89¢ EACH (no limit).
You can also order the entire album with just one click at a special reduced rate.
Clicking 'BUY' on any of the song links will take you to Andy's MP3 shopping cart, where songs are listed in album order. You can order as many songs as you want.
When you check out, an e-mail will immediately be sent to you for each song you purchased, with a link for downloading each song.

Songs From the CD "Something For the Weekend"