Now here's a real split-personality kind of guy. By day he is mild-mannered Pete Rizzo, retired Biology Professor Emeritus from Texas A&M University. He taught some of the hardest courses, the kind that washed out students who couldn't cut it. But by evening, he still turns into Sneaky Pete, performing his original, witty songs in clubs to his cult-like fan base. His music is blues-influenced and well-recorded, and most of all, very funny - a natural for Picklehead. He has had an amazing TWENTY FOUR songs on Dr. Demento, including 'BBQ Barney' which was #5 on The Funny Five, and 'Booger On My Beer Mug' which reached #1 for two weeks in a row. The song "Weird Al Yankovic For President," which appears on his newest album below, was # 9 (2/25/12) and # 7 (2/28/12) in the Dr. D. Top 10, and # 8 in his Top 25 for 2012!
Whew! That's quite an accomplishment for a Professor Emeritus. What a guy!

We are happy to bring Sneaky Pete to a wider audience. We'll pass on those biology courses though...

All the songs listed below are now available for digital download at JUST 89¢ EACH (no limit).
You can also order the entire album with just one click at a special reduced rate.
Clicking 'BUY' on any of the song links will take you to Sneaky's Download shopping cart, where songs are listed in album order.
You can order as many songs as you want.
When you check out, an e-mail will immediately be sent to you for each song you purchased, with a link for downloading each song.

Brand new, hilarious music from Sneaky Pete, now firmly entrenched in the Smoky Mountains of Tennessee. It's not exactly where they filmed the movie "Deliverance" but...you get the picture.

The Great Beef Jerk Off:

So. After looking at the album cover above, a lot of you might be asking, "Is Sneaky Pete really a butcher?" Well, not exactly. But he butchers a lot of music. In a good way of course. But if you're one of the many fans of Sneaky looking at this you already know that. It's why you like the guy. Us too.

Molly Left Her Dolly on the Trolly:

Milking the Dragon Part I: 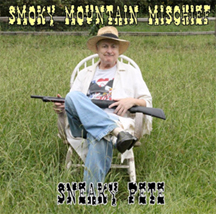 Sneaky has moved from Texas to Tennessee! And in typical Sneaky fashion, he's released a new album all about the Smoky Mountains, filled with his usual trashy humor. There are songs here about the usual suspects - dating your cousin, farting in church, frying your brains, roadkill, and many more. We don't know for sure, but we think Sneaky recorded this album in a remote, mountain cabin - you know, the kind with a little building out back with a half moon on the door. So grab yourself some moonshine and check out the song samples below!

I Gotta Watch What I Eat:

Pootin' In the Pew:

My Dog Is Gifted:

The Goose and the Gander:

Bad Dogs and Bloody Toes (CD $12.95)--comedy music
titles: Bad Dogs and Bloody Toes * My Nasty Dog * I Love You 'Cause You Remind Me Of My Dog * My Dog Got Run Over By A Garbage Truck * My Karma Ran Over Your Dogma * My Cat Suffers From Hairballs * Rhinestones and Polar Bears * Academic Question * A Dart In the Butt * Headsucker's Ball * Eat Right * Rotten Banana Song * Garlic Hill * Something's Wrong?