This hilarious comedy-music artist started out many years ago on the Dr. Demento show with his classic parody '99 Dead Baboons' and never looked back. A Chicago-area native, Tim has toured just about everywhere, and has appeared on Comedy Central, Showtime, and even ABC TV. He appears on the Bob and Tom Radio Show, and writes for The Danny Bonaduce Radio Show. This is a talented man - and now he has put some of his funniest bits and songs on his CD, 'Sounds Like Fun.'  NINE songs off of this CD have been featured on the Dr. Demento Show. Wow! That's gotta be some kind of record. Ya gotta get some of this stuff!

Every Tim Cavanagh song is now available for Digital Download for just 89¢ per song! 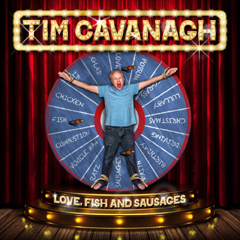 The One Minute Song, Volume 2 (CD $12.95)--comedy music
Another  collection of goofy greats, as recorded on the Bob and Tom Show.
Twenty-four songs in all!
titles: Two Thumbs Up * Greatest Hits Of Big Mouth Billy Bass * Monster Ash * My Magic Mask * Queen Mum * Enron * Eric Roberts * C-I-N-C-O * Reflections On Ted Williams * Montego Bay Airport * Got Eggs * What Would Jesus Eat * Equinox * Mir * I Hate Going Back To School * Jesse Ventura On Broadway * Another White Christmas * Happy Father's Day * Rock In the USA * I Believe You Could Fry * Thorpedo * Happy Thanksgiving * Naughty To the Bone * Taboo